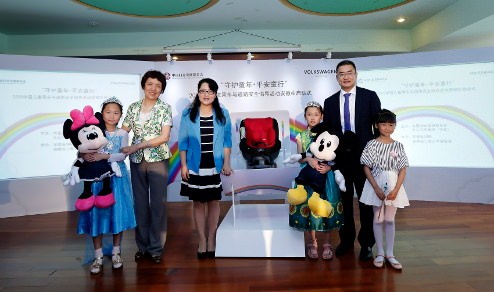 The event was attended, among others, by Li Caiyun, Secretary-General Assistant of CWDF, Yang Xinbin, Senior Manager of CSR, Volkswagen Group China, officials from Anhui Women’s Federation and Anhui Children and Teenagers’ Fund. At the opening ceremony, Volkswagen Group China and CWDF donated child safety seats to Anhui Women’s Federation, promoting child road safety in Anhui and the national legislation on compulsory use of child safety seats by taking concrete actions.
“Regarding traffic safety education, parents are the children’s first teacher and best role model, and their role is particularly important as more and more families have their own cars. Child road safety must start from parents,” said Li Caiyun, Secretary-General Assistant of CWDF. “The ‘Protect Childhood, Child Safety First’ project is to develop parents’ knowledge about child road safety for better protecting children in cars, and increase public awareness of child road safety.”

“As one of the earliest multinational car groups to enter the Chinese market, Volkswagen Group has always taken ‘beyond responsibility’ as its CSR vision,” said Yang Xinbin, Senior Manager of CSR department, Volkswagen Group China. “We are duty-bound to promote child road safety, and committed to protecting child on the road through unremitting efforts.”
After the opening ceremony, a master trainer from Volkswagen Academy taught parents how to install and use child safety seats in a detailed manner. Besides, there were multiple interactive activities such as 4D experiment, child safety playhouse and exhibition of children’s paintings about traffic safety, which helped the participants fully realize the significance of protecting child on the road, but also vividly demonstrated the right way to protect children in cars and on road, thus effectively increasing their child road safety awareness.

According to statistics, the motor vehicle ownership in Hefei has topped one million, including nearly 600,000 private cars, and the ownership is increasing at the rate of approximately 400 vehicles per day. Nationwide, there have been already 35 cities with a car ownership of more than one million. According to the report of a child road safety and child safety seat use survey jointly conducted by Volkswagen Group China and CWDF in 11 large and medium-sized Chinese cities in 2014, the number of China’s motor vehicles has exceeded 137 million. In the cities surveyed, most children mainly and frequently take family-owned cars for trips. However, the overall child safety seat use rate only stood at 11.5%, with as high as 50.1% of adult respondents reporting the wrong car-riding behavior of holding a child on their lap. Cited reasons for such behaviors include children’s unwillingness to use child safety seats, short distance and limited interior space. Obviously, there is still a long way to go in promoting child safety seat use and protecting child road safety in China.