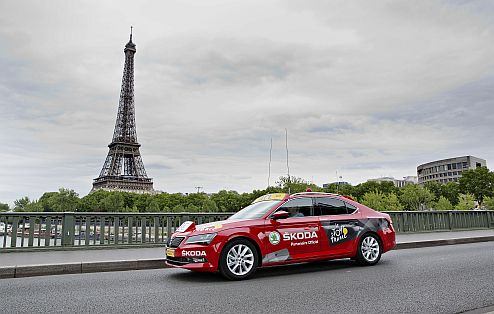 A dozen and counting: ŠKODA AUTO has been the official sponsor and official vehicle partner to the Tour de France for the twelfth time this year. One highlight is the premiere of the new ŠKODA Superb, which will serve as the ‘Red Car’, leading the rider field. The 250-vehicle ŠKODA fleet once again forms the focus of ŠKODA’s sponsorship. ŠKODA is also sponsoring the Green Jersey for the best sprinter at this year’s Tour for the first time. The Tour de France takes place from 4 to 26 July.

“Supporting the most famous bicycle race in the world is an annual highlight in our comprehensive sponsorship of cycling,” said Werner Eichhorn, ŠKODA Director of Sales and Marketing. “Our commitment to the Tour de France has a special highlight this year with the premiere of our new ŠKODA Superb as the ‘Red Car’. 120 years of ŠKODA – that also means 12 decades of our connection to cycling: the history of our company began in 1895 with production of bicycles by our founding fathers Laurin and Klement.”

The 102nd Tour de France covers over 3360 kilometres in 21 stages this year. The starting gun will be fired on 4 July in the Dutch city of Utrecht. The riders will cross the Champs-Elysées finishing line on 26 July.

ŠKODA has been the official vehicle partner and official sponsor of the legendary Tour since 2004. This is the first year that the company will be sponsoring the Green Jersey for the best sprinter in the Tour de France. Between 2004 and 2014, ŠKODA sponsored the White Jersey for the best young rider.

Spectators’ eyes will be drawn to one thing in particular leading the rider field over the next few weeks: the so-called ‘Red Car’ – the new ŠKODA Superb. The brand’s completely redeveloped flagship sets new standards in its class, featuring emotive designs, the most room in its segment and state-of-the-art technology. During the Tour, the red ŠKODA Superb serves as a kind of ‘mobile control centre’ for Tour-Director Christian Prudhomme. “I’m really looking forward to travelling in the new Superb. The car offers more space than the already spacious predecessor and really looks the part – a perfect Red Car,” says Prudhomme.

For this one occasion, the new Superb has been painted ‘Corrida-Red’, and a huge panoramic glass roof has been installed that can be opened at the touch of a button. This means that Prudhomme can stand up when the roof is open. In addition, the Superb is fully equipped with technical equipment to perfectly fulfil its function as the ‘mobile control centre’ of the tour. This includes four radio channels, over which the tour director can receive information and give orders.

The brand will also be providing a strong fleet of ŠKODA vehicles again this year, including around 250 cars – mainly ŠKODA Octavia estates and ŠKODA Superbs to serve as accompanying vehicles. The ŠKODA fleet has been the centrepiece of ŠKODA’s sponsorship activities. During these three weeks, the vehicles will cover around 2.8 million kilometres, and since 2004, the ŠKODA fleet has travelled over 30 million kilometres at the Tour de France. ŠKODA has managed this with the highest level of reliability: so far, not a single car has ever broken down.

ŠKODA’s sponsorship will also be accompanied by a broad communications campaign. ŠKODA’s ‘WeLoveCycling’ website, newly launched last year, features live reports, films and lots of information on the world of cycling. The site also gives visitors the chance to win an array of prizes including spending a day in the peloton of the Tour de France. More can also be found at www.skoda-radsport.de. ŠKODA will also be pulling out all the stops on social media at facebook.com/skoda-cycling.

Cycling is a cornerstone of ŠKODA’s sponsorship strategy. Besides the Tour de France and the Tour of Spain (‘Vuelta’), the car manufacturer supports other international cycling races and numerous international and national grassroots cycling events. Bikes and accessories also form a part of ŠKODA’s extended product range.

ŠKODA’s commitment to cycling demonstrates the special relationship the brand has to the bicycle. ŠKODA’s founding fathers Václav Laurin and Václav Klement began the company’s success story 120 years ago with the construction of bicycles.

The Tour de France is the most important stage race in the world, and is considered the world’s third largest sporting event after the football World Cup and the Olympic Games. Last year, around 15 million supporters turned out to cheer on the riders on the track, and 1.4 billion people watched the race on the TV and Internet.